Dr. Luff has an amazing life story! Born the oldest of four to a single parent, he overcame fatherlessness, gang involvement and homelessness. He was the first person in his family to graduate from college. With over 20 years of experience, he is a seasoned speaker and trainer who has turned the hearts of thousands across the nation. From a former president of the United States, to a teenage runaway, Dr. Luff’s messages bring hope and inspiration to all.

Dr. Luff is an over-comer! Raised by his mother, a housekeeper, Dr. Luff grew up in an impoverished environment. As the oldest son in a single parent family, he was thrown into he role of father figure to his three younger siblings while lacking a strong male role model for himself. His greatest ambition in life was to become the first member in his family to attend college – a dream almost deferred when his family became homeless during his senior year in high school. Despite homelessness and discouragement from his guidance counselor to attend college, Dr. Luff continued to work hard and was eventually accepted into Northeastern University in Boston, Massachusetts to pursue a Business and Human Resources Management degree.

Five years later he was chosen as the Student Commencement Speaker for his class and preceded then President of the United States, Bill Clinton. President Clinton was so impressed with Dr. Luff’s tenacity and drive that he invited him and his mother to the White House. After working with a national community service organization, Dr. Luff went back to school to receive his master’s degree from the Harvard Graduate School of Education with a concentration in Administration, Planning, and Social Policy. After Harvard he was chosen to receive a Fellowship degree from the prestigious Center for Social Innovations at the Stanford University Graduate School of Business, Executive Program for Non-Profit Leaders. Recently, Dr. Luff completed his Ph.D. at the University of San Diego School of Leadership Studies with a concentration in Organizational Leadership and Educational Consulting.

Dr. Luff has spent over 20 years working with organizations as a leadership consultant, social entrepreneur, and advocate for social change. Extremely devoted to youth development and family empowerment, he has created and directed social service programs throughout the United States and Asia.

Dr. Luff was recognized as a recipient of the esteemed San Diego Channel 10 Leadership Award as a caring resident “who goes above and beyond to make San Diego a better place to live by improving the quality of life for those who need it most.”

His core values and belief in faith, discipline, action, and hard work led to special appearances at the Fleet Center (formerly the Boston Garden), the White House, the John F. Kennedy Library and Museum, and the Crystal Cathedral’s “Hour of Power” television broadcast. His life is a tale of inspiration and hope for the American dream which has impacted hundreds of institutions and thousands of people across the world.

Today he lives in Chula Vista, CA with his wife and their five children. For speaking, consulting, or life coaching opportunities feel free to contact Dr. Luff by email at [email protected] 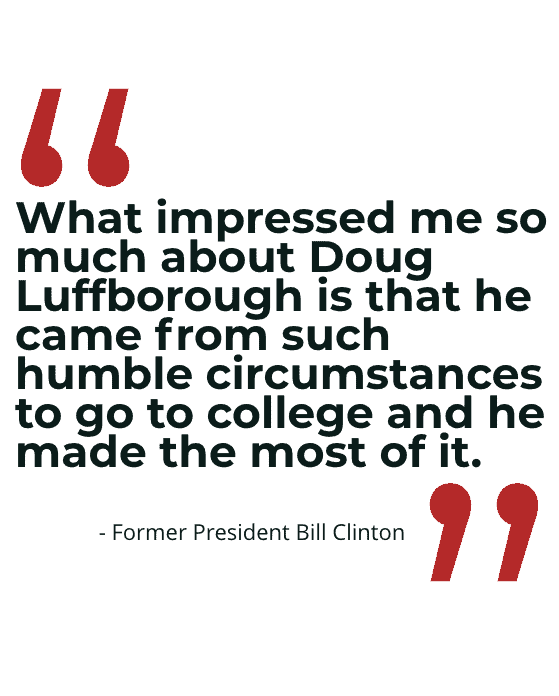 Thank you for visiting dougluff.com. If you would like to connect with Dr. Luff, please leave your contact information below.

Each person who signs up will receive one complimentary coaching session with Dr. Luff.